In 1940, Romania lost the town of Sighet following the Second Vienna Award. In 1944, Wiesel, his family and the rest of the town were placed in one of the two ghettos in Sighet. Wiesel and his family lived in the larger of the two, on Serpent Street.
On May 16, 1944, the Hungarian authorities allowed the German army to deport the Jewish community in Sighet to Auschwitz-Birkenau. While at Auschwitz, his inmate number, "A-7713", was tattooed onto his left arm.[8][9]
Wiesel was separated from his mother and sisters Hilda, Beatrice, and Tzipora. Wiesel's mother and sister Tzipora were presumably killed in the gas chambers upon arrival. Wiesel and his father were sent to the attached work camp Buna, a subcamp of Auschwitz III-Monowitz. He managed to remain with his father for over eight months as they were forced to work under appalling conditions and shuffled among three concentration camps in the closing days of the war.
On January 29, 1945, just a few weeks after the two were marched to Buchenwald, Wiesel's father was beaten[10] by a Nazi as he was suffering from dysentery, starvation, and exhaustion. He was also beaten by other inmates for his food. He was later sent to the crematorium, only weeks before the camp was liberated by the U. S. Third Army on April 11.[11] 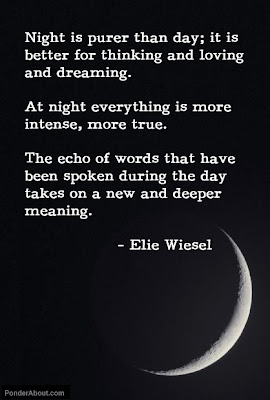 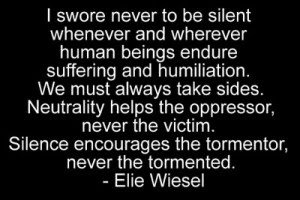 
A Kaddish or Prayer:


Be his great name blessed forever,
Yea, to all eternity.
.
Be the name of the most Holy One Blessed,
Praised and honored, extolled and glorified,
Adored and exalted supremely...
Posted by Linda Bob Grifins Korbetis Hall at 10:32 AM

an interesting book to read and think of 1945.

a fun book to read.

I love those quotes! Night is one of my favorite books. We are reminded of the cruelty of humanity. I think it's good to be reminded of how depraved we are capable of being in order to avoid such inhumanity in the future.

glad to see the book review.